‘Showing that you’ve dug out something that’s never been dug out before.' And that is exactly what Freek Hoekstra has done. Read the story of one of the very first Games alumni.

‘Showing that you’ve dug out something that’s never been dug out before.’ And that is exactly what Freek Hoekstra has done. In 2011, he was one of the first students who graduated from the game programme at BUas (then NHTV). What does he do now, and how does he look back on his student days after ten years?

‘It was actually quite hard,’ Freek begins his story from his living room in Vancouver, Canada. ‘I was studying 60 to 70 hours a week. It was quite normal to be engaged in your studies so many hours a week. People really went all out. It was a new degree programme, and the bar was set very high. Everybody was constantly pushing each other; things could always be done better. The competition was fierce, but we always helped each other. I simply didn’t have the time to lie around; this was the perfect learning environment for me. I still miss it!’ 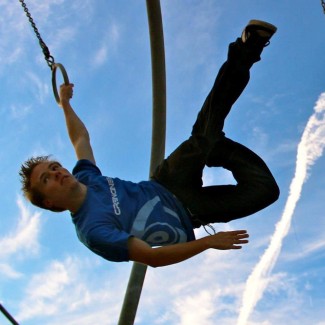 The competition was fierce, but we always helped each other. I simply didn’t have the time to lie around; this was the perfect learning environment for me. I still miss it!

Freek Hoekstra, one of the very first Games alumni

‘With this quality you won’t get a job in the industry – bam – that’s what you were told. It sounds very blunt, but our lecturers were all professionals from the game industry; they really know what they are talking about. It was a harsh reality check. It’s brought me very much though. This mentality of going on until it is really good; that’s how we were being drilled. Perhaps this was hard, but also honest. And I’d rather have a hard reality check at an early stage, than discover after four years that it is not my sort of thing. This high minimum standard helped me in my profession.’

You’re just going to do it!

‘I used to be very afraid of Tech-art. I very much wanted to learn scripting and Houdini, which is a software tool which you can make procedural 3D animations with. However, I’m a dyslexic and I was not very good at mathematics either. “I don’t care,” my lecturer said, “you’re just going to do it!” It took me a lot of effort, with my head against the wall for two months, but I was successful. It taught me not to be afraid to try to do something difficult. What’s more, I’m a professional Houdini Artist now; something I had considered impossible before.’

‘The degree programme really focuses on the skills you need for this trade. That’s what I missed in other programmes which I visited. To be honest, I found them a little woolly. Anyone can think up something, but you should be able to produce it. I was shown first-year products in Breda, and that was technically very impressive. It fitted precisely into the picture I imagined. Hard skills are the basis.’

‘During my work placement at Playlogic in Breda, I mainly learnt how things should not be done. The company went bust when I worked there. I learnt from that, too. I developed a sort of antenna which came in handy later when choosing whether I wanted to work for a company or not. After I graduated, I could choose from four companies. I eventually opted for SideFX in America; the company that developed the Houdini software tool. I helped them lay the foundation of, among other things, the Houdini engine, a plugin for games, and I laid the foundation of the tools that were used in Sunset Overdrive and Spiderman the Game at a later stage.’

Digging out something new

‘For my graduation assignment, I developed a tool which you can build a new level in a game in one hour’s time with. That’s what took you some three weeks before. Coming up with something new is very important in the game industry. Showing that you have dug out something that has never been dug out before. After leaving SideFX, I worked at Electronic Arts in Vancouver for a couple of years. I worked on, among other things, FIFA football video games, Need for Speed and UFC. Meanwhile, I switched over to Tech, first at Apples Special Project Group, and now I work on Autonomous Driving at Applied Intuition as a Procedural Artist.’

‘I build virtual worlds in which we test self-driving cars and robots. At the moment, I work on a virtual version of cities around the globe. It’s the real world for self-driving cars, with virtual Lidar Radar Camera and ultrasonic sensors, but nobody gets injured if something goes wrong. We can also test tens of thousands of scenarios in 10 minutes’ time, or add or delete obstacles wherever we want. In this way, we test very quickly what works and what doesn’t, and whether we’ve fixed something or that there are unforeseen consequences.’

Technique is not faultless

‘A lorry driver can work just eight hours a day, a self-driving car can continue to drive effortlessly 24/7. If you think that tired lorry drivers might also cause fatal accidents, it’s money for jam. And no, not a single technique is faultless, but you could certainly make it drive better than human beings. And testing remains important of course. We do so in a simulation environment that provides insight into achieving the ultimate.’

‘Every now and then – when I am in the Netherlands – I deliver a guest lecture at BUas or a Q&A. I think the nicest thing to deliver is these Q&As; you are talking about things students are engaged in or struggle with. If I can offer help, it is more satisfactory to me than talking about the things I like to do. It is currently impossible for me to participate in them for some time to come, but I hope I can go to Breda soon. I have just heard that there’s an autonomous robot making its rounds on the BUas campus, whose name is LoWie. I really want to see it!’