After 28 successful FreshBrains projects carried out in various cities in Canada, Germany, the United Kingdom, Belgium and the Netherlands, it seemed for a while as if the FreshBrains Week could not take place this autumn.

In such FreshBrains Weeks, BUas students get working on a ‘quality of life’ issue in a certain city together with students from Calgary, Aachen, Wuppertal and Hasselt. At the end of the week, they come up with a well-thought-out plan for a concrete spatial intervention contributing to the quality of life at the location. It is not unusual for them to even carry out a small ‘guerilla’ activity. The concept is internationally recognised: FreshBrains won the national ‘Deutscher Fahrradpreis’ for communication at the beginning of this year. 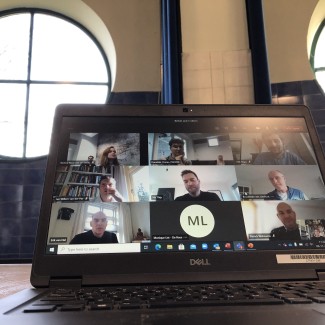 The intensive interaction between students, client and the expert in the role of coach inspires us, makes us curious, encourages us to be entrepreneurial, enhances creativity and thus, help all parties to get on

‘Skipping the FreshBrains Week was not an option for me,’ says Ineke Spapé. She works at BUas as Emeritus Professor of Mobility Management and professor of Integrated Sustainable Urban and Mobility Planning, and has organised a FreshBrains Week a few times a year since 2013. ‘The good thing about it is that it’s a learning community in which all aspects are related. Students get to work for a real client in an international environment. They are facing great challenges because they need to come up with a solution in a short period of time and with a limited budget often. This requires quite some creativity. The concept, however, has meanwhile proven itself, and that’s why I started seeking a corona-proof alternative.’

Ineke has set up an online version in cooperation with the municipality of Eindhoven, who participated in a previous live edition of FreshBrains. ‘A bit experimental, that’s what the municipality knew, too, so I am very pleased they wanted to try this out with our students,’ Ineke smiles. ‘We started out in a small setting with four students of the Urban Retrofitting minor. They started working on the topic Tactical Urbanism, a principle which you can improve residents’ quality of life with by making temporary and relatively cheap adjustments.’

The locations were the inner ring road in Eindhoven city centre – gray, dominated by cars and an unattractive area to walk around in – and Westtangent running parallel to it; the latter being a racetrack, in the residents’ opinion, with useless traffic signs and absolutely unsafe for children. The students were instructed to organise a playful intervention for both locations with hardly any budget, as a temporary experiment, but with the prospect of the area being upgraded on a continuous basis.

‘Normally speaking, students are being immersed as it were in the subject matter because they’re on the spot for a week,’ says Ineke. ‘And now, everything had to be discovered from a distance; that required a fair amount of re-thinking. After a first online briefing by Erik van Hal of the municipality of Eindhoven, the four students – according to the then applicable RIVM measures – were allowed to have a look at the location since they would not manage it by only using Google Streetview. Afterwards, all of them only communicated online.’

‘It also took quite some getting used to,’ admits Ineke. ‘In the case of a live FreshBrains week, I am not only busy detailing out the research question in the preparation phase, but I’m also arranging practical matters such as booking hostels and arranging bike rentals. Because on a bike, students, certainly international ones, learn and see the most about the issues involved. I didn’t need to spend any time on organising the practical part of this week anymore, and this allowed me more time to profoundly prepare the assignment as regards content together with the municipality. Another advantage for, in this case, the municipality of Eindhoven is that an online version of FreshBrains is far cheaper: no expenses required for hostels and travels, which makes it easier for municipalities to partake in such a FreshBrains Week.’

‘Every morning and every afternoon, I had online contact with the students to help them with what they were up against as regards content or as regards process. Having online brainstorming sessions did not prove to be such a big deal. Yet, experiencing them all is different. In the live edition, the impact of immersing students is evidently much bigger. Students can really get to know a location, and they have conversations about this topic 24/7, in pubs, at hostels, on their bikes. They go around together with international students and as a result of this cultural mix, they learn a lot about other points of view. In the German FreshBrains, for example it all revolves around helping fledgling German bicycle cities up. As far as this point is concerned we could offer a lot building on our experience in the Netherlands. Even our international students appear to be real ‘bike ambassadors’. In the next online edition I certainly want to try to achieve this international mix of students.’

For the Eindhoven locations, our students worked out a vision and a plan of action for a guerilla. They pitched it to the civil servants at the end of the week, and at a later stage, once again to two municipal executive councillors and some departmental heads.

‘One of the ideas is to make the inner ring road more attractive to pedestrians together with residents by creating small gardens around trees – so no more ‘lonely trees’ – whose forms should ensure that motorised vehicles reduce their speed. At Westtangent, they want to engage schoolchildren and putting them in in visible places to make motorists aware of the areas they are racing through.’

‘FreshBrains  as a learning community is a proven concept to me. It’s a type of education giving me great joy. The intensive interaction between students, client and the expert in the role of coach inspires us, makes us curious, encourages us to be entrepreneurial, enhances creativity, strengthens the international scope and thus, help all parties to get on. In my opinion, such an intensive track is more effective for everybody than spending fragmented hours on being engaged in the subject matter for eight weeks. It would be preferred to spend 4 times 8 consecutive hours in such a compact week, than 32 hours divided over 8 lecture weeks, with a few hours every week. There’s no need for you to dive into the subject matter every week, and you need to switch subjects less often; it’s far more effective for the lecturer and students. I’ve discovered that even the online variant of the FreshBrains Week doesn’t harm the quality of the final product: a wonderful new addition to the FreshBrains products as far as I’m concerned.’