Graduate Evert van de Grift has ‘action’ written all over him! He combines his job as a film producer with the position of lecturer in Media Design.

Evert van de Grift has ‘action’ written all over him! As early as during his Media studies at NHTV (currently BUas) he was already working in the business and today he combines his job as a producer with the position of lecturer in Media Design. He produced, among other things, the film Just Say Yes, which – at the time of this interview – will be launched in just over a week. It is the first Dutch film to premiere internationally on Netflix.

‘I like action, yes, more distinctly even, when I finished my mbo graphic design course, I said: I’m done with school. For good! That’s how much I wanted to start working. I became a web designer, looked at my boss and thought: this whole manager thing, I can do that too. At the time, NHTV (currently BUas, eds.) started a new degree programme in Media and Entertainment Management, which was exactly what I was looking for. In the second year of the programme we went to Flagstaff, Arizona, where we were immersed in a professional TV studio. Priceless! Literally, I put in so much hard work, but what an experience! It was during that field trip that I found out what I love most.' 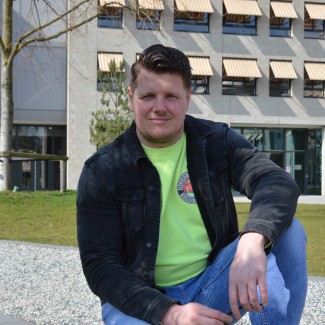 ‘Action is so important in this business. So this is actually also my advice to today’s students and recent graduates: eat, sleep, create, repeat. You can’t do too many productions. Make sure you are on the set all the time; show them your potential. I did that in my third-year placement at Eyeworks (currently Warner Bros, eds.) which is where I truly learned the ropes of production work. I was offered to stay, but I at the time I chose to continue with my studies, because I really wanted to learn all about the marketing side of the business as well. I got that opportunity during my graduation placement at film distributor RCV Entertainment (currently WW Entertainment BV, eds.). There I worked for almost three years and eventually completed my studies too.’

‘You also need to be a little gutsy. I was working at RCV when I met Adel Boudellah. We were both working in the marketing department and they were working on a Sinterklaas film there. We can do that too, we said, and not much later we were allowed to pitch. Together with Adel I then founded AM Pictures. Data analysis is invariably the first stage of our productions. Who go to the cinema often? Girls aged between 13 and 18. What do they like and what are they into? Vlogging, fashion, love and school. This leads you to a teen high-school type of film and before you know it you’re watching films like this evening after evening together with all the creatives, which all happen to be men. We didn’t start working on the script until much, much later. This is how Fashion Chicks was born. This whole ‘reframe your thinking’ thing is something I learned during my studies. We actually work the other way around and begin with the marketing stuff. In the children’s films we gave roles to the first Dutch YouTube child star and to the daughter of Marco Borsato. This commercial thinking is also something I definitely owe to my education.’

‘And it actually works! Even though people in the business thought we were a little weird at first. And even though it didn’t yield enough initially. So I had to reframe my thinking once more. I was offered a job as lecturer in Media Design at Fontys University of Applied Sciences. And this time I didn’t think: I can do that too. I never thought I would become a lecturer, but I find it surprisingly fun! At first I considered it as a kind of bridging year, but I’m already in my fifth year now. And the nice thing about it is that I have now supervised the first graduates who I saw coming in as ‘clean slates’ in their first year. It is such a wonderful feeling to be able to transfer your knowledge, to see students grow and to keep learning myself in the process. I have learned more from my students than during all those years of being in the business. I recommend teaching to everyone, even if it is ‘just’ a guest lecture. As a matter of fact, guest lectures are what I enjoyed the most in my student years!’

‘Our fifth film, Just Say Yes, will premiere next week (on 2 April 2021, eds.) on Netflix, and honestly, to me it feels like a bit like make or break. It just has to become a hit film, and if not, I will retire as a lecturer, which I think I can live with quite well, as it happens. But Netflix is enthusiastic and I am kind of proud that we managed to get a foot in the door. What’s also interesting, is that I get to meet other NHTV graduates through my Netflix contacts. It is an inspiring company, offering a lot of different genres, so should we get the chance, we can start making other films besides romantic comedies. My goal is to make a film I'd actually go to the cinema for myself, an exciting and riveting action film. That’s what I love!’