Breda University of Applied Sciences was ranked number 1 in the Netherlands in the field of Hospitality & Tourism Management in the Global Ranking of Academic Subject (GRAS) 2021 which was released by ShanghaiRanking Consultancy.

ShanghaiRanking began to publish Academic Ranking of World Universities (ARWU) by academic subjects in 2009. The Global Ranking of Academic Subjects has scrutinised the universities that have published a certain number of publications. The publication threshold is set differently for different subjects. Bibliometric data are collected from Web of Science and InCites. 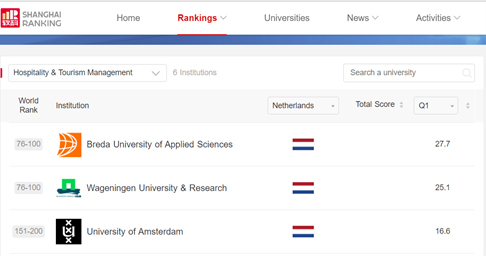